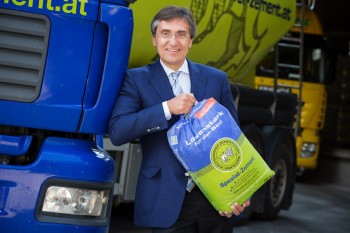 The history of the Kirchdorfer Group started with the foundation of the cement plant in 1888 – so it is very suitable to set another milestone on the same premises in 2013 i.e. 125 years later: at the end of June the 20 millionth ton of cement from the own production was delivered.

The “anniversary ton” was delivered by the company Rems Beton to St. Florian in Upper Austria, where it was transformed into a base plate of a WSG housing estate. “The first time that we sold over one million tons of cement was in 1939. Then it took another 48 years to reach ten times as much. That was in 1987. And today, only 26 years later we topped the 20-million mark. That is really amazing.” says Mag. Frommwald, manager of the Kirchdorfer Group about this unique development.