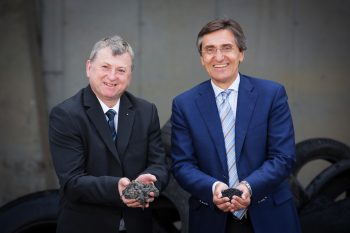 On November 25 the two Upper Austrian manufacturers of construction material Kirchdorfer and Asamer contracted their announced co-operation. Both enterprises hold a 50% stake in the newly founded KIAS Recycling GmbH. The core business of the enterprise is the recycling of scrap tires at the Ohlsdorf location, the managers are Robert Pree and Anton Secklehner.

Since 2003 the ASAMER subsidiary ART (Austrian Rubber Technology GmbH) at the same location has been dealing with the material recycling of scrap tires. The thus produced granulate is used for artificial turf fields, fall protection, impact sound insulation and for agricultural purposes.  Furthermore, an aggregate for asphalt, a motorcycle underride guard with rubber layer and a low sound protection wall without a foundation with an absorbing rubber element was also developed.

Beside the already existing material recycling of scrap tires the future focus will be on the high-quality energy recovery. A special competence centre is being set-up, where specially processed rubber fractions will be produced for this purpose. For the Kirchdorfer company that has been successful with fuels for 125 years this joint-venture is the continuation of a successful strategy in order to guarantee necessary resources. Erich Frommwald, the CEO of the Kirchdorfer group comments: “The ecological cement production demands a reduction of CO2 emissions that develops with the burning of coal. This is why in the meantime we use up to 70% alternative fuels. With this co-operation the Kirchdorfer cement plant can guarantee the alternative fuels on a long-term basis.” Last August the Kirchdorfer cement plant received the “recognition for exemplary environmental measures in cement industry” by Nikolaus Berlakovish, Federal Minister for Environmental Issues. The new co-operation confirms this strategy.

Discussions about possible co-operations with other business branches between ASAMER und KIRCHDORFER are not intended at this point.