FROM THE KIRCHDORFER CONSTRUCTION DIARY … Rotop® Power for the Marina Tower

More than a decade after the original planning and years after the ground-breaking ceremony, the lighthouse project on the right bank of the Danube in Vienna is finally – and rightly so – coming to pass: extra-strong spun concrete was applied on the 39-story residential tower, which will be placed on a total of 84 Rotop® spun concrete columns in the coming months! In other words, a total of around 500 residential units will soon be supported by the Rotop® supports on the lower floors, where the shopping and dining areas, as well as a medical center and a kindergarten, are being added to provide exclusive living enjoyment. Following the marketing motto „fulfilled life” …

The Rotop® columns that are used for this project are in any case „filled to the brim”. It is well known that some of the five to six thousand Rotop® columns that leave the MABA plant in Micheldorf every year are true performance monsters. But every now and then there are building projects that push the boundaries of what is feasible a little further upwards: the approx. 13-meter-long Rotop® supports that are produced for the Marina Tower at Wiener Handelskai with a diameter of 70 + 80 cm were designed to support the equivalent of the weight of 3,200 mid-range cars. This means that you could put the entire Eiffel Tower – including visitors – on a total of only four such columns!

In each of the 18-ton pillars there is a 6-ton reinforcement structure that our highly qualified and certified specialists have welded professionally and meticulously. The resulting reinforcement level of 16% is also unique in the whole country and may only be implemented in Austria by the MABA precast industry with its corresponding qualifications and specific quality assurance.

As is often the case, the Rotop® columns were delivered during night-time – due to the traffic situation in Austria’s Capital City. Rather unusually, though, the columns were threaded with an extra-high crane from high up through the recesses in the already erected floor ceiling! This saves

considerable costs that would otherwise be required for renting heavy-duty stands for months. The installation was therefore a rather spectacular and elegant ballet in yellow and blue, to which the two leading specialist logisticians and crane operators came with their heaviest vehicles. The main role was of course the massive columns from Micheldorf that evening. Interested passers-by may take a closer look at the building in the coming weeks and months, before the pressure monsters disappear behind the pretty facade of this new Vienna landmark building. 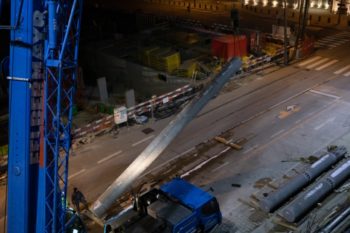